Customers who use AWS Control Tower and Alert Logic can get automatic protection of existing and newly enrolled accounts through a series of automations. 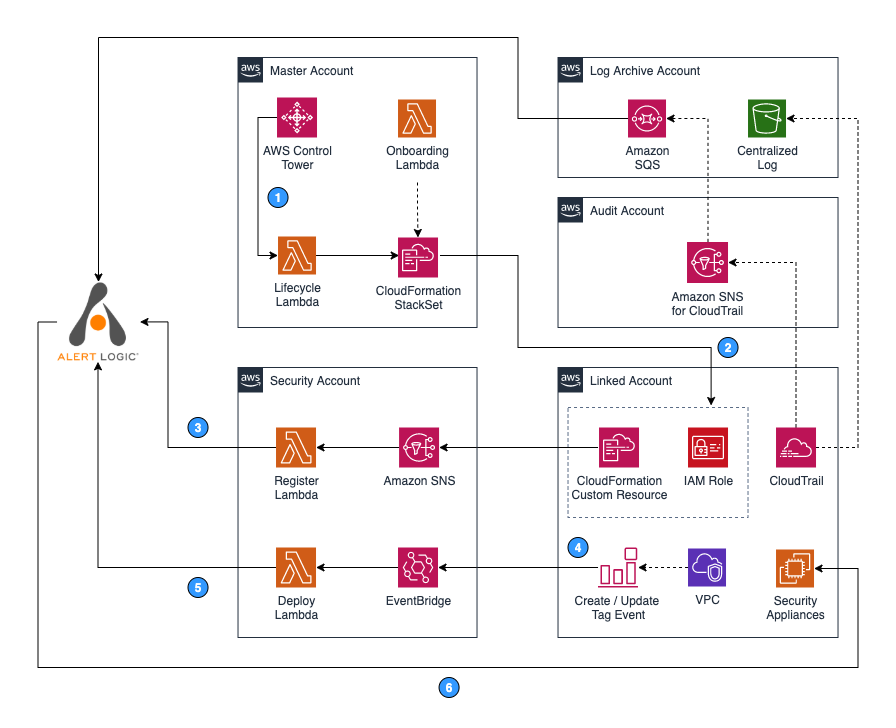 Accounts shown in the architecture diagram:

The following steps are associated with the numbers indicated in the architecture diagram.

The AlertLogic-CT StackSet launches stackset instances in all AWS accounts included in the scope of deployment. In each account, this stackset creates an IAM role for Alert Logic and a CloudWatch Event rule for detecting tag changes on VPC. The AlertLogic-CT stackset create additional resources in the Security Account, including an Amazon SNS Topic, two AWS Lambda Functions, and an Amazon EventBridge Event bus.

You do not need to enable any additional resources other than the ones enabled by AWS Control Tower.

You do not need to increase any limits, but note that the automation solution creates an EventBridge in a security account to capture tag updates in linked accounts.

Before you implement this solution, Alert Logic recommends that you become familiar with AWS CloudFormation, AWS Lambda, AWS CloudTrail, and Amazon EventBridge services:

After you complete the CloudFormation deployment, you can see your linked accounts listed as deployments in the Alert Logic console.

Validate that the solution is properly deployed

The Alert Logic appliance deploys automatically within 15 minutes to the linked accounts.

Alert Logic automatically claims the agents and assigns them to the appliances.